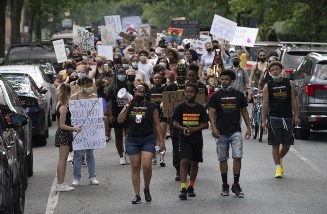 TJ Students and Graduates gather to in Downtown Frederick for the Black Lives Matter movement.

In the midst of 2020, it has come to the attention of many across the nation that systematic racism and discrimination against African Americans still lingers in society. With that being said, it is vital to think about what you can do in your community to stand up against such unacceptable conditions. Frederick’s March for Justice is our local voice to spread awareness on the Black Lives Matter Movement today.

Frederick’s March for Justice is the up-and-coming nonprofit organization founded by Amiyah Spencer, Isaiah Spencer, Gabrael Moore, Blair Hudnull, Akkiyah Billups, and Alijah Gee. Some of whom are current or graduated TJ students.

“Our original goal was to become a voice of the community. We wanted to start pushing uncomfortable conversations like racism, to get these issues acknowledged in order to make change.” Amiyah Spencer, junior, expresses that their purpose is to enforce unity, so no one has to face such vicious challenges alone. “It was to unite our community during a time where everything and everyone just felt so divided.”

Though their organization was only founded in June of 2020, they’ve come as far as traveling Frederick County, administering protests, community givebacks, and many other events since then and more to come in the near future.

Now with such a powerful movement you can only imagine the thoughts and feelings of our community. Thankfully, Amiyah has admitted that they’ve been overwhelmed with love and passion from most of whom recognize their good deeds. “We’ve even been talked about and recognized on a federal level from senators and congressmen around the DMV [Delaware/Maryland/Virginia area].”

This well-deserved recognition has allowed Frederick’s March for Justice to work alongside local government as well as other organizations and members of the community to intake feedback on what change they would like to anticipate in Frederick. Their dedication to making change is to go above and beyond what words can say and to give those hope by displaying it.