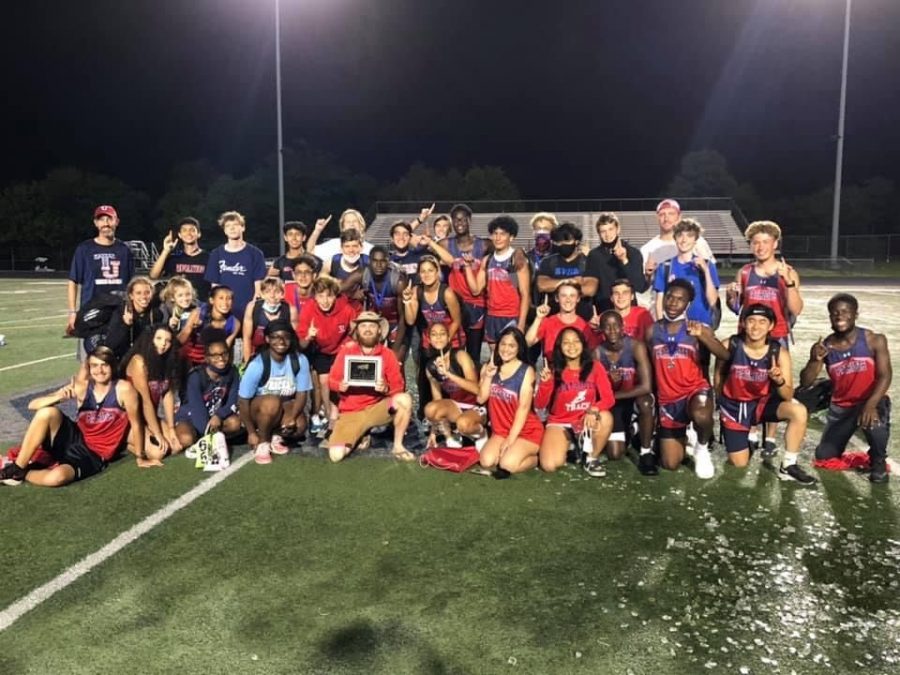 from Oakdale, Urbana, Middletown, and Frederick. The Patriots put out a great performance despite all the opponents, with many athletes winning in their event. Dakari Burton won the boys 400 meter dash by almost two seconds with a final time of 52.66, while beating out an incredible 20 other runners. Mack McKeever and Alex Lombardo began the mile race together but Alex Lombardo unfortunately injured himself on the second lap as he was sailing into first place. Alex Lombardo was also unable to continue for the rest of the meet which dealt a huge blow to the team as they had to replace him in relay events and would be losing out on many valuable points from him. However, this did not phase his teammate Mack McKeever, as he finished the mile with a time of 4:33, beating out the second place opposition by a whopping 17 seconds. The boys’ 4×100 team (Oscar Contreras, Gareth Fountain, Simon Essono, Sylvester Olofio) narrowly defeated a solid Oakdale team by one second. The Boys 4×400 team (Dakari Burton, Julian Moltere, Lucas Tessarollo, Mack McKeever) won big against 4 other teams, with Dakari Burton and Mack McKeever leading the team. As much success as there was on the track, there was less success on the field, however Elisa Ramos beat 17 other opponents in the girls Pole Vault, with a height of 9 feet to win that competition. In addition, the boys 4×800 team(Amin Contreras, Lucas Tessarollo, Dakari Burton, Julian Moltere) was unfortunately beaten by a hair by the Oakdale team, who finished above the TJ team by only .35 seconds.

The Patriots then had a week to recover and train for the next meet which they would be hosting at TJ on Saturday, May 15.

They faced Frederick once again, but also Brunswick and Tuscarora. TJ would find this meet more difficult than the previous meet, due to multiple athletes being unavailable. Despite this, Alex Lombardo

came back after his unfortunate first meet with a win in the 800m. Mack McKeever also asserted his dominance in the 1600m by once again winning it comfortably. The boys 4×400 team also won once more and beat the opposing 5 teams. Elisa Ramos joined the other double winners by winning the girls’ pole vault again, but this time she increased the height by one foot and 6 inches for a total of 10 feet and 6 inches. The TJ team took complete command of the boys triple jump event, as they racked up first through seventh place, with Sylvester Olofio getting first and impressing with a distance of 35 feet, 6 inches. In the end, Linganore won the meet with a score of 102, while TJ was close behind with a score of 93 and got second place.

The next meet was only five days away from the TJHS meet, occurring on Thursday May 20 at Catoctin High School. This was a special meet for Catoctin because it would be their first time hosting a track meet in over twenty years. However, the TJ team showed no mercy. In the boys’ 100m, the TJ athletes got second (Sean Snody), third (Sylvester Olofio), and fourth (Simon Essono), only narrowly missing out on first place. The sprinters also found similar luck in the 200m, as they got second (Sean Snody), and third

(Gareth Fountain), with first place still slightly out of reach. Dakari Burton added to his collection of winnings by winning the 400m as he did in the first meet, this time with a 53.44 second time. Mack McKeever did the same by winning the 800m with a time of 2:05, as Julian Moltere got second. Alex Lombardo also won the 1600m, but when it came to the relay events, the TJ team would find very bad luck as they finished second in the boys 4×100, 4×200, 4×800, and the girls 4×100, and 4×200. The one relay team that won was the boys 4×400 team who won for the third time in a row and still have not tasted defeat in that event. Moving onto the field, the boys got first, second and third in the high jump, with Dillen Owusu winning that competition for the first time with a height of 5 feet, 4 inches. Peter Kamanu also took a big victory in the pole vault event by clearing an incredible 13 feet, 7 inches. Elisa Ramos did the same on the girls side as she won for the third time. Salomon Agustin added to the points accumulated for TJ by winning the shot put event with a distance of 36 feet, 4.5 inches.

I spoke to Dillen Owusu who is a member of the team and at the most recent meet, won the high jump, and got third in both the 110m hurdles and the 300m hurdles. I asked him about how he thinks the season has gone so far and he said, “So far this track season has been great! As a team I think we are improving at a fast rate. When asked about how this season has been personally and what it was like winning the high jump, he said, “Personally this is my best season so far, and I have increased multiple personal records and at our most recent track meet, I received first in high jump. When the season first started my jump wasn’t that good as I had multiple things wrong with it. This came with poor results on the first meet clocking in at a height of 4’10.  I knew I had the height to go higher but with more improvement to my form, my personal record increased. When the bar went to 5’4, there were only the five people predicted to get first place left, and I was the first and only one to clear 5′ 4, giving me a Personal Best and 1st place.  It was a very enjoyable experience and pleasing to know that within 2 years I went from jumping 4’2 to 5’4.  I hope I continue to improve!” In addition, I asked about how he thinks TJ will do at the upcoming counties meet, and he responded by saying, “I think TJ has a very good chance to win counties and if we all give it our best and beat our personal best we can win counties and move on from there.” Finally, I asked Dillen about his favorite part of the season and he said, “My most memorable and favorite part of track this season has probably been passing my own expectations at meets and cheering everyone on. Here at TJ, everyone is really supportive of everyone and cheering everyone on and everyone cheering you on is a great experience.”